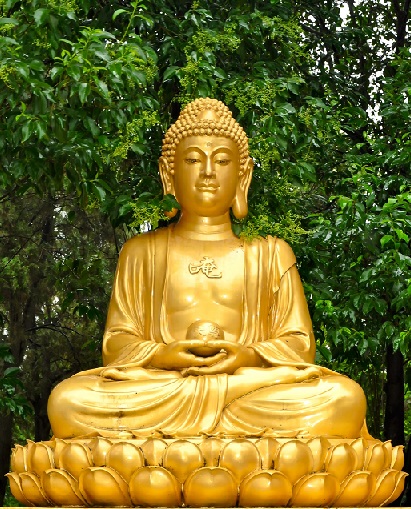 In 1957 a monastery in Thailand was being relocated and a group of monks was put in charge of moving a giant clay Buddha. In the midst of the move one of the monks noticed a crack in the Buddha, concerned about damaging the idol the monks decided to wait a day before continuing with their task. Later on one of the monks came to check on the giant statue, he shined his flashlight over the entire Buddha and when he reached the crack he saw something reflected back at him. Curiosity aroused the monk and he got a hammer and chisel and began chipping away at the clay Buddha. As he knocked of piece after piece of clay the Buddha got brighter and brighter. After hours of work the monk looked up in amazement to see standing before him a huge solid Gold Buddha.

Historians believe Thai monks had covered the Buddha with clay several hundred years earlier before an attack by the Burmese Army. The Thai monks covered the Buddha to protect it. In the attack all the monks were killed, so it wasn’t until 1957 that the great treasure was discovered. Like the Buddha our outer shell protects us from the world, our real treasure is hidden within. We human beings unconsciously hide or inner gold under a layer of clay – all we need to do to uncover our Gold is to have the courage to chip away at our outer shell piece by piece.

I love this story because it’s message is that we are all perfect and beautiful and even though - through all of our experiences we have allowed our inner gold and beauty to be covered and hidden away - for a million different reasons - there is always hope – our gold is within – it’s already there. With a bit of effort we can chip away and deal with all the fears, issues and concerns we have and really start to shine, becoming the best possible person we can be – our authentic selves.