A Little Snippet of an EPIC Story
With a great Life Lesson! 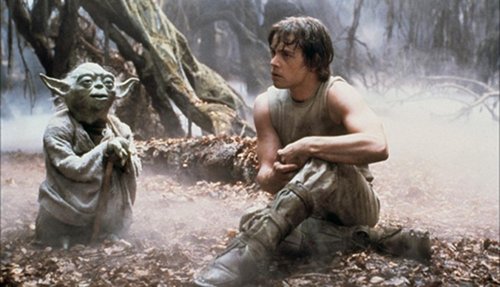 Star Wars - The Empire Strikes Back!

Allow me to first briefly set the scene, for those who are not to familiar with the movie (I admit I am a fan and did name my first son after 'Luke Skywalker')

In this; the fifth out of the seven movies that make up the amazing, epic Star Wars Story, Luke is travelling to Dagobah. The planet where he will meet his new mentor 'Yoda' (the little green guy). After an awkward, strange meeting Luke and Yoda start training and discussing the light and dark side of the force. Yoda is teaching Luke to face his fears and re-train his mind using the force. In one powerful scene during his training, Luke is using the power of the force to move rocks. During which he notices his X-Wing ship has sunk into the swamp. The only part visible is the nose. So our snippet begins; to quote:

YODA : "So certain are you, always with you it cannot be done! hear you nothing that I say"

LUKE "Master moving rocks around is one thing, this is totally different.

YODA "No, no different, only different in your mind. You must unlearn what you have learned"

LUKE "Alright, I'll give it a try"

Luke closes his eyes and using the force concentrates his mind on moving the ship (as he did with the rocks) out of the swamp. For a moment the X-Wings nose begins to rise. But just as quickly it slides back down into the swamp.

YODA "Size matters not, look at me, judge me by my size do you"

YODA "And well you should not, for my ally is the force and a powerful ally it is. Life creates it and makes it grow. Its energy surrounds us and binds us. Luminous beings are we, not this crude matter. You must feel the force around you, here between you, me, the tree, the rock, everywhere. Yes even between the land and the ship"

LUKE "You want the impossible"

Luke then walks away in disbelief. But little Yoda turns toward the swamp and concentrates, he raises his hand towards the sunken ship and miraculously it begins to emerge. A few moments later the impossible has happened. Luke's previously sunken X-Wing has fully emerged from its seemingly new grave; the swamp. Luke stares in amazement.

YODA "That is why you fail"

Whether you're a Star Wars fan or not, this is an amazing thought to ponder and to look deeper into your own life and the beliefs you hold.

And a little note from one who is much younger and knowledgeable on Star Wars (my own Luke) if you haven't yet seen these movies and choose too (great decision) start with the originals; now known as 4, 5, 6!

Karen Offord › Blog 2016 › A little snippet of an Epic Story - with a great Life Lesson!